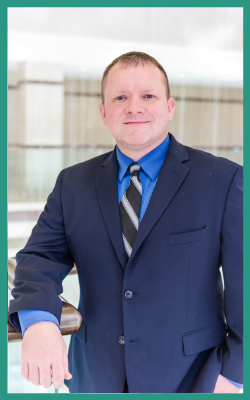 James comes from a diverse level of life experiences.  Like so many, he grew up in a single-family home where his Mom struggled but persevered raising two young men.  It would be many years after leaving home he realized the sacrifices she made to ensure he and his brother never felt they were ‘different’ than other families.  He grew up in the panhandle for most of his formative years as kid and young man.

He decided that it was time to serve his country and enlisted in the United States Marine Corps.  He served on Active Duty for four years.  During this time, he had the humbling experience of meeting and making friends with a diverse group of brothers – many whom remain an influence in his life today.  He received numerous medals for superior performance during his service.  Upon leaving active duty, he returned to his immediate family in NorthWest Arkansas where he attended the University of Arkansas in Fayetteville.  Upon completion of his undergraduate work, he received his Bachelors in Business Administration with an emphasis in Information Systems in the top of his class.  He then went on to get is Juris Doctorate at the same university.  While in Law School, he was active in many organizations including serving as the student Editor-in-Chief of the Journal of Islamic Law and Culture.

Upon leaving Law School, he and his family relocated back to his home state of Texas.  He started his career as a title attorney in real estate.  He then went on to build a successful litigation practice in the Dallas Metroplex.  He is a skilled litigator and practiced in a broad area ranging from real estate, estate planning, and family law.  He is a Certified Mediator in Family matters and a Certified Parenting Facilitator / Coordinator.  He was honored to have the opportunity to further his legal experience as a Managing Attorney for Legal Aid of NorthWest Texas for three separate offices during his tenure here.

James understands the struggles of families.  It is at the core of how he practices.  When a family must be reshaped, he understands the emotional struggle this causes.  He seeks out to resolve the conflicts in the most efficient way by reaching agreements where they can be made.  When an agreement can’t be reached, he is not shy to going to the Courthouse and litigating to achieve results.